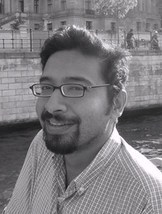 Gautam Chakrabarti is an Assistant Lecturer in English and Comparative Literature and "Berlin and German Studies" at the Freie Universität Berlin (FUB), where he has been a Dahlem Research School (DRS) HONORS Postdoctoral Fellow (2014-15) with the project “'Non-Committal Involvements': Literary Detectives and Cold Warriors across Eurasia".

He has also finished, at the FUB, his PhD on "Familiarising the Exotic: Introducing European Drama in Early Modern India" (2011-14, submitted on 30.07.2014, defended with the highest grade, namely "Summa Cum Laude“, on 03.11.2014), under Prof. Joachim B. Küpper, within the ERC-Project "DramaNet". He has studied English Literature and Culture Studies in Jadavpur University (MA, 2000) and Jawaharlal Nehru University (MPhil, 2005), India, and has taught the same in various colleges of the University of Delhi (2003-10, tenure from 2005). He was a Visiting Lecturer in English language, literature and culture and Hindi in a couple of universities and institutes in St Petersburg, Russia, in Autumn-Winter, 2008-9. In Spring-Summer, 2009, he made a conference-cum-fieldwork-tour of various universities and archives in Finland, the Baltic States, Poland, the Czech Republic, Germany and Russia, for a research-project on "Literature and Politics in the Cold War"; and is also interested in Indic Studies, Jewish literary-cultural history and Ethnomusicology, themes on which he hopes to work in the future.